why spay or neuter

WHY should you Spay or Neuter your pet?

What does it mean to “Spay and Neuter” your pet?

Spaying and neutering are both procedures used to sterilize animals like dogs and cats, but spaying refers to the procedure done to female animals while neutering is the corresponding process for males. Spaying involves taking out the uterus and ovaries while males are neutered by removing the testicles.

BENEFITS of Spaying or Neutering

Your female pet will live a longer, healthier life. Spaying helps prevent uterine infections and breast cancer, which is fatal in about 50 percent of dogs and 90 percent of cats. Spaying your pet before her first heat offers the best protection from these diseases.

Your spayed female won’t go into heat.While cycles can vary, female felines usually go into heat four to five days every three weeks during breeding season. In an effort to advertise for mates, they’ll yowl and urinate more frequently—sometimes all over the house!

Your male dog won’t want to roam away from home.
An intact male will do just about anything to find a mate! That includes digging his way under the fence and making like Houdini to escape from the house. And once he’s free to roam, he risks injury in traffic and fights with other males.

Your neutered male will be much better behaved.
Neutered cats and dogs focus their attention on their human families. On the other hand, unneutered dogs and cats may mark their territory by spraying strong-smelling urine all over the house. Many aggression problems can be avoided by early neutering.

It is highly cost-effective.
The cost of your pet’s spay/neuter surgery is a lot less than the cost of having and caring for a litter. It also beats the cost of treatment when your unneutered tom escapes and gets into fights with the neighborhood stray!

Spaying and neutering your pet is good for the community.

Stray animals pose a real problem in many parts of the country. They can prey on wildlife, cause car accidents, damage the local fauna and frighten children. Spaying and neutering packs a powerful punch in reducing the number of animals on the streets.

Spaying and neutering helps fight pet overpopulation.
Every year, millions of cats and dogs of all ages and breeds are euthanized or suffer as strays. These high numbers are the result of unplanned litters that could have been prevented by spaying or neutering.

The decision to spay or neuter your pet is an important one for pet owners. But it can be the single best decision you make for his long-term welfare.

Getting your pet spayed or neutered can:

In every community, in every state, there are homeless animals. In the U.S., there are an estimated 6-8 million homeless animals entering animal shelters every year. Barely half of these animals are adopted. Tragically, the rest are euthanized. These are healthy, sweet pets who would have made great companions.

The number of homeless animals varies by state—in some states there are as many as 300,000 homeless animals euthanized in animal shelters every year. These are not the offspring of homeless “street” animals—these are the puppies and kittens of cherished family pets and even purebreds.

A USA Today (May 7, 2013) article cites that pets who live in the states with the highest rates of spaying/neutering also live the longest. According to the report, neutered male dogs live 18% longer than un-neutered male dogs and spayed female dogs live 23% longer than unspayed female dogs. The report goes on to add that in Mississippi, the lowest-ranking state for pet longevity, 44% of the dogs are not neutered or spayed.

Part of the reduced lifespan of unaltered pets can be attributed to their increased urge to roam, exposing them to fights with other animals, getting struck by cars, and other mishaps.

Another contributor to the increased longevity of altered pets involves the reduced risk of certain types of cancers. Unspayed female cats and dogs have a far greater chance of developing pyrometra (a fatal uterine infection), uterine cancer, and other cancers of the reproductive system.

Medical evidence indicates that females spayed before their first heat are typically healthier. (Many veterinarians now sterilize dogs and cats as young as eight weeks of age.)

Male pets who are neutered eliminate their chances of getting testicular cancer, and it is thought they they have lowered rates of prostate cancer, as well.

Getting your pets spayed/neutered will not change their fundamental personality, like their protective instinct. Read more spay/neuter myths »

Unneutered dogs are much more assertive and prone to urine-marking (lifting his leg) than neutered dogs. Although it is most often associated with male dogs, females may do it, too. Spaying or neutering your dog should reduce urine-marking and may stop it altogether.

For cats, the urge to spray is extremely strong in an intact cat, and the simplest solution is toget yours neutered or spayed by 4 months of age before there’s even a problem. Neutering solves 90 percent of all marking issues, even in cats that have been doing it for a while. It can also minimize howling, the urge to roam, and fighitng with other males.

In both cats and dogs, the longer you wait, the greater the risk you run of the surgery not doing the trick because the behavior is so ingrained.

Other behavioral problems that can be ameliorated by spay/neuter include:

While getting your pets spayed/neutered can help curb undesirable behaviors, it will not change their fundamental personality, like their protective instinct.

When you factor in the long-term costs potentially incurred by a non-altered pet, the savings afforded by spay/neuter are clear (especially given the plethora of low-cost spay/neuter clincs).

Caring for a pet with reproductive system cancer or pyometra can easily run into the thousands of dollars—five to ten times as much as a routine spay surgery. Additionally, unaltered pets can be more destructive or high-strung around other dogs. Serious fighting is more common between unaltered pets of the same gender and can incur high veterinary costs.

Renewing your pet’s license can be more expensive, too. Many counties have spay/neuter laws that require pets to be sterilized, or require people with unaltered pets to pay higher license renewal fees.

Spaying and neutering are good for rabbits, too

Part of being conscientious about the pet overpopulation problem is to spay or neuter your pet rabbits, too. Rabbits reproduce faster than dogs or cats and often end up in shelters, where they must be euthanized. Neutering male rabbits can reduce hormone-driven behavior such as lunging, mounting, spraying, and boxing.

And just as with dogs and cats, spayed female rabbits are less likely to get ovarian, mammary, and uterine cancers, which can be prevalent in mature females.

Millions of pet deaths each year are a needless tragedy. By spaying and neutering your pet, you can be an important part of the solution. Contact your veterinarian today and be sure to let your family and friends know that they should do the same.

Source: Humane Society of the US

Top 10 Reasons to Spay or Neuter Your Pet - ASPCA 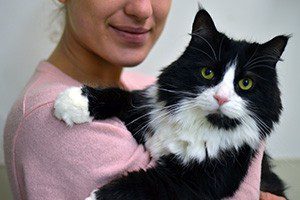 Whether you’ve recently adopted a pet or you’re considering it, one of the most important health decisions you’ll make is to spay or neuter your cat or dog. Spaying—removing the ovaries and uterus of a female pet—is a veterinary procedure that requires minimal hospitalization and offers lifelong health benefits. Neutering—removing the testicles of your male dog or cat—will vastly improve your pet’s behavior and keep him close to home.

Many states and counties have established low-cost spay/neuter programs that make surgery easily affordable and accessible. To find a low-cost program near you, search our Low-Cost Spay/Neuter Provider Database. If you’re in New York City, the ASPCA mobile spay/neuter clinic offers free or low-cost spay/neuter surgery for financially needy dog and cat owners with proof of public assistance. Please contact our hotline at (877) SPAY-NYC for a listing of dates and locations in all five boroughs.

Not convinced yet? Check out our handy—and persuasive—list of the top 10 reasons to spay or neuter your pet!